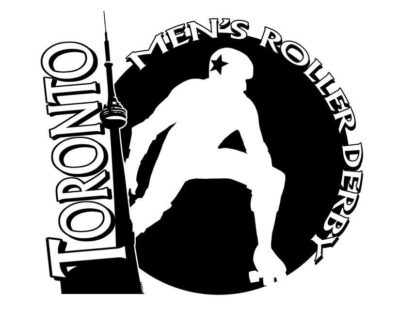 Today, we speak with skaters Arnold Bacon & Egger and Señor Wiener of Toronto Men’s Roller Derby, the No. 7 seed at the NAQ qualifier.

Bacon & Egger, a blocker and pivot with TMRD skates under No. 132. He’s been playing derby for 5 years, all with Toronto.
Wiener, a jammer, has been with Toronto since 2012 and has also spent his entire derby skating career with them.

Arnold Bacon&Egger: I’m very excited about playoffs. Playoffs to me mean my team and I have made steady improvements in our game. It also means I get to hang out with great people. The derby community is full of strangers that become friends so amazingly fast.

Wiener: I get to see so many skaters I’ve had the pleasure of seeing at events over the years. I’m also looking forward to meeting more new derby friends. It means a lot to have made playoffs this year. Our training committee had this set as a goal for the team and I’m happy to have achieved it and our team’s highest rankings placement so far.

B&E: It would be a surprise. Don’t get me wrong, I’d love to qualify for champs, but we are building ourselves up over time. I’m just happy to get to this level. If we qualify for champs it’ll mean further adventure and some new friends.

W: It would be a bit of a Cinderella story and I’m a sucker for those.

B&E: I look up to everyone on my team. They all constantly amaze me with their ability to put up with me. If I had to pick one on my team though, I’d have to say Señor Wiener. He’s just a positive guy and an amazing jammer. Outside of my team, I admire Scald Eagle and Sexy Sladie. They’re my favorites to watch in the WFTDA. My favorite junior turned senior is Loren Mutch.

W: I look up to anyone who dedicates time, effort and energy into this sport. There is passion everywhere and it’s not always paired with the biggest names.

B&E: Well, my favorite from comics was Magneto in ‘Marvel Zombies’ trades, but if we’re talking about Marvel movies than I pick Black Panther as he seems to have it all.

W: Gambit, because he’s the coolest.

B&E: Umm yes! I would make some variation on a chess boxing theme. It’d be roller derby then immediately go to the team having to go head-to-head game show quiz style, then immediately back to next jam.

W: Probably not, it was fun to watch as a kid though.

B&E: Too many to pick one. They come way too natural to me.

B&E: “Dude, suckin’ at something is the first step to being sorta good at something.” -Jake the Dog, Adventure Time

B&E: I can’t wait to get out to Fitchberg! They seem to love giant donuts and tiny airline-sized alcohol. I can respect that.