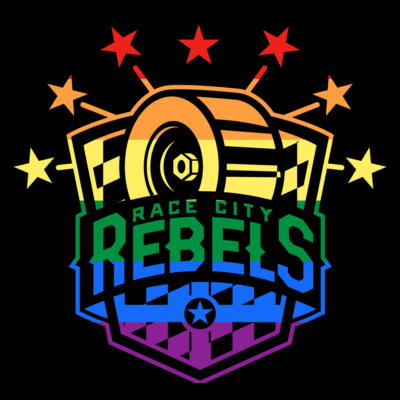 Today, we speak with skaters CARR BOMB and Skateman Spiff of Race City Rebels, the No. 6 seed at the NAQ qualifier.

CARR BOMB, a blocker and pivot with Race City skates under No. 52. He’s been playing derby for 9 years, all with the Rebels.

Spiff, a blocker and occasional pivot, who wears No. 79, has been with Race City for 4.5 years and has also spent his entire derby skating career with them.

CARR BOMB: I’m excited to see where we stand among the rest of the teams there. We have some newer skaters on the roster this season and it will be a great experience for them. Playoff/tournament derby always brings out the best in Race City.

Skateman Spiff: Honestly, I’m salivating at the chance to play Denver again. We matched up against them in Vancouver last year and Race City came out on top in what was a really fun game. There was a lot of drama about the most recent rankings that I don’t really care about. I just want to play another fun game against a tough opponent and see where how we match up this year.

CB: That would be a huge and unexpected accomplishment. We didn’t expect to qualify for champs last season, but we did. So I guess it would mean something magical happened at playoffs again.

SS: In 2017, the Rebels qualified for champs in Wales, but we weren’t able to commit to the travel expense. Our team lost a lot of skaters compared to the roster we had in Vancouver last year. Despite our roster changes, we’ve remained competitive. To qualify again would be a huge team accomplishment that we would celebrate.

SS: Too many to name. Sir Nixalot, now with the Gatekeepers, was a huge influence on me when he was still skating in Indy and taught me a lot. Punky Bruiser is another teammate I really admire. She aged out of JRDA, joined Race City (even though there are two women’s leagues in Indianapolis as well). She is one of our co-captains in 2018. Her drive is awe inspiring.

SS: Hulk. Without being too much of a bummer, certain aspects of my family situation were difficult to deal with as a kid which left me with a fair amount of anger. “That’s my secret, I’m always angry.” I’ve just learned how to use that anger to fuel my desires.

CB: Nope. I’ve never been a fan of WWE wrestling and I have zero interest in being in a skating version of it.

SS: Not even a little interested in that cheese.

CB: The cemetery is a popular place. Everyone is dying to get in. My own dad has told this joke way too many times.