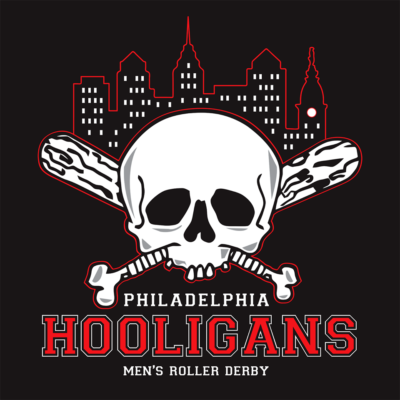 Today, we speak with skaters Timmy Twitch and Yosemite Slam of the Philadelphia Hooligans, the No. 1 seed at the NAQ qualifier.

Twitch, a blocker with the Hooligans skates under No. 2469. He’s been playing derby for 5 years, all with Philly.

Slam, a blocker, wears No. 8 and is in his ninth year. He’s been with the Hooligans for 5 years and previously played for Man’s Ruin, a MADE team.

Timmy Twitch: To finally get to play with my family and earn our spot at champs and be able to go. I wasn’t able to go last year due to travel restrictions.

Yosemite Slam: I’m excited to go to playoffs for the second time because we get to go toe-to-toe with some amazing teams.

TT: It would mean that all this work we’ve been putting in for the past 5 plus years was worth it.

YS: Coming out of the NAQ in a qualifying position would be huge for me because last season after playoffs I pulled myself out of competition because of finances and health issues, so this would be my first trip to champs.

TT: I would have to say my teammate Yosemite Slam. Since day one he pushed me to prove myself as a Hooligan.

YS: I look up to Marco Torres from Austin Anarchy. He’s a true athlete and sportsman who is always where he needs to be and probably one of the calmest players ever to take the track.

TT: Deadpool, because have you met me?

YS: Deadpool, because I’m always joking around and no matter how hard the beating I’m always going to get up and keep coming at you until it’s over.

TT: Hells yes! I’m still waiting for it to come back. As a kid growing up skating every weekend I used to dream of doing that when I grew up.

TT: I bought some shoes from a drug dealer. I don’t know what he laced them with, but I was tripping all day.

YS: I have three quotes.

“Lead me, follow me or get the hell out of my way.” – George Patton

“Tell them what to do, not how to do it. Sometimes you’ll be surprised with the results.” – Vince Lombardi

TT: It’s been a hard year with all the travel, but I wouldn’t trade any of it in. I’ve gotten to spend this summer with my family.

YS: When Philadelphia first started we were branded as the team that couldn’t decide what rule set we wanted to play. Not a lot of people took us seriously, but 4.5 years later we’re going into playoffs ninth overall. It just goes to show what hard work and determination can give you if you put the work in.