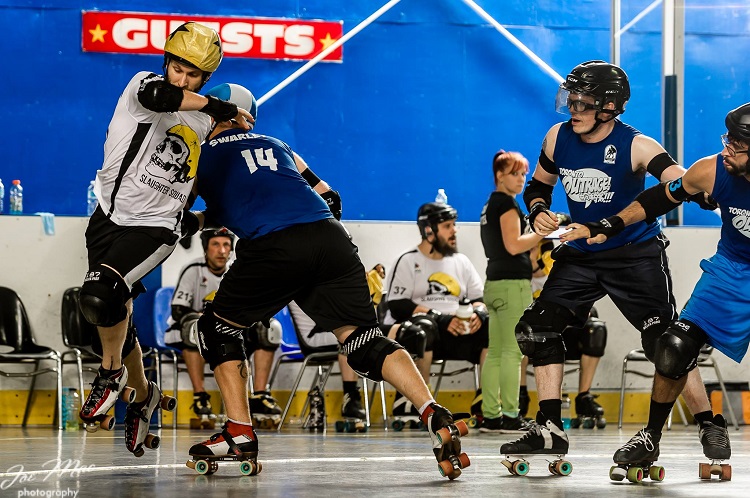 The tournament will be consist of two, three-team pools, with a round robin on Saturday to determine seeding for Sunday’s elimination games. 11 games are scheduled, with each team competing in 3 or 4 matches.

Pool A consists of Montreal, Toronto and Glenmore (Calgary), with Vancouver, Ottawa and Philadelphia rounding out the field in Pool B.

Action kicks off Saturday morning at 9 am with the 14th -ranked Mont Royals squaring off against the Outrage, ranked 27th. These teams most recently met in April, with Montreal skating to a 208-126 victory.

At 10:30, ranked 15 th, the Murder will make their Eastern Canada debut against the hometown Slaughter Squad. This will be the first meeting between these two teams.

Another first-time meeting will follow at 11:30, with the Reservoir Dogs facing the Mont Royals. This will also be the Calgary squad’s first foray into Eastern Canada.

Following a brief break, action at Jack Carron resumes at 2:00 pm with the number 16 Hooligans looking to leapfrog the Murder, in their first-ever meeting. This game will be a huge chance to impress for both, with Championships just around the corner.

At 3:30, the Outrage and Reservoir Dogs renew relations after a lengthy hiatus, with their first and only meeting in May of 2014 in Calgary, with Glenmore having taken the victory, 324-176.

Saturday’s round robin action concludes with the Slaughter Squad hitting the track against the Hooligans at 5:00. This will mark the first time these teams have met. Sunday’s action also commences at 9 am, with the first of two semi-final games. Upon completion of the semi-final bouts, the 3 rd place finishers in each pool will meet at 12:00 pm in a 5th -place game. Third place will be contested at 1:30, and the weekend will culminate with the Championship game at 3:00.