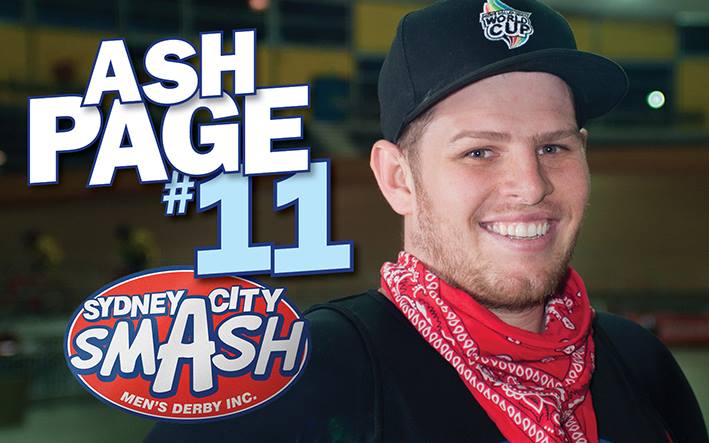 Each month, the Men’s Roller Derby Association selects a skater that we believe to be the embodiment of the values we represent and the achievements that we wish to see all of our skaters attain. This skater showcases teamwork, dedication, and sportsmanship both on and off the track. We believe that these values are the building blocks for any successful league, team, skater, and person.

This month, the MRDA is pleased to announce our choice for Skater of the Month to be: Ash Page of the Sydney City SMASH

We asked Ash some questions about his role in the derby-verse. The interview is posted below:

What got you into Roller Derby?

My friend was skating with WA Roller Derby in Perth and invited me along to watch. For the next year, my partner and I went to all the games to support our local team, Sonic Doom.
The league was playing a Star Wars themed bout and I was a member of the 501st at the time. I learned to skate so we could have a Stormtrooper race a skater at half time. I lost, by almost a whole lap, but I’d been on skates for three weeks by then so I’m glad I could stand up.
At that point, WARD’s head of Coaching Taye Q. Down (I still don’t know what the Q stands for) suggested that I join and learn to skate. Once finishing my fresh meat, she suggested that I form a men’s team because she could tell that I wasn’t set to be a skating official. Two days later, I formed Perth Men’s Derby and set out starting to form a derby team out west!

What is your biggest accomplishment thus far?
I’ve had many highlights over my years of derby. Competing with the Wizards of AUS at the 2016 Men’s Roller Derby World Cup is one of those highlights, to be able to have taken home a bronze medal with that team was such a thrill. It’s fantastic to see the development of our sport in Australia and that it’s not just the top level skaters but in all the clubs in Australia. The push from individuals to get on the Wizards of Aus has pushed the level of skating through the roof in all of Australia.

2017 has been a particularly special year for Sydney City SMASH. We hosted our first tournament, and it was Australia’s and the Southern Hemispheres first MRDA sanctioned tournament. It’s been a dream of mine to have MRDA teams competing in my home town and to get five MRDA teams in Sydney for one weekend of action was amazing. The Thunderquads came in from Argentina and we had worked hard to make sure that all the Australian MRDA teams had the opportunity to play them.

SMASH Also set a goal in 2016 to head over to the United States to play some derby and work of building up our derby. We went to Sibling Rivalry in 2017 and had the opportunity to play five sanctioned games while we were in the states. Just getting a team to the states was hard work but playing six games in the States with only eight skaters was a challenge but the SMASH brother did a great job. I was honored to have been awarded as MVP Blocker at Sibling Rivalry which was a surprise but a very welcome one to be recognised for my hard work.

How do you push yourself to be a better athlete? 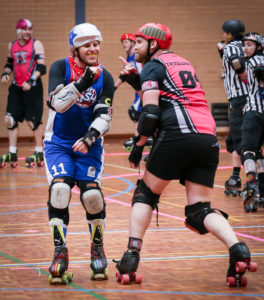 I push myself by pushing my teammates. As a blocker, I am only as good as the skater next to me. So naturally, I develop friendly rivalries with my teammates, This helps me push my boundaries and allows me to challenge my fellow skaters. One of my mates Greese Monkey has traveled to Vancouver Murder to up his training prior to his departure we would spend our warm up challenging our lateral movement while sucking back on a jammer. Both of us had realised that we needed the development of this skill as we were losing the Jammer on a one on one battle so we worked together to help build on our weaknesses.

What are your goals for the upcoming season?
2018 will be a year of personal and team goals. As an individual, I want to continue my development of my lateral coverage and blocking form. As I’ve said I’m always looking for challenges to myself and my teammates, and although I’m usually found as the last line of defense, I want to be there for longer. Who doesn’t want to hold Sausarge Rolls for longer, or at all? As a team, Sydney City SMASH will be working on deepening our roster and skills and we’ll be looking at playing more MRDA sanctioned games, I’m sure our progress with show in our game play.

Who inspires you most?
Good sportsmen. At Sydne, we’ve made sure that we always show respect to other skaters, officials, spectators and most importantly each other. This level of sportsmanship is everywhere in our sport but is overshadowed occasionally by the attitude of one or two rather than the majority.
Some skaters that have always shown a high level of sportsmanship and I always enjoy skating with them. A few skaters I would like to name, Princess Twinkle Toes from Victorian Vanguard, they have always show their good sportsmanship during their games and I had the opportunity of skating with them for quite a number of years. Recently during Sydney’s game against Twin Cities, I racked up four penalties in the first half of game play, Derbie Monster came up to me at halftime and said “Dude I want to be on the track with you at the end of the game. Don’t foul out on me!” I didn’t foul out on him, and when I picked up my 5th Derbie asked me what I was doing, and being the good sport he was, he didn’t say anything when I picked up my 6th.
The skater that inspires me the most is now retired but used to skate with Brisbane City Rollers, Hellton. Hells was one of the first blokes skating in Australia and he always played the game with a level of sportsmanship that I have always admired. I’m proud to call him my friend, brother and mentor.

What do you do outside of derby?
I work for the local Skate Shop in Sydney, SkaterHQ and am lucky enough to coach people on how to Roller Skate. Outside of Derby I like to play board games, drink a nice Cab Sav and discover where the newest hidden bar is!

What song do you listen to to get pumped before a bout?
Sweet dreams are made of this by the Soul Rebels followed by Lucky Chops doing Danza Kuduro/Eye of the Tiger

What advice would you give to new skaters?
Ask all the questions. As a new skater, I was ravenous for knowledge and would ask my coaches everything. Know that you are not the only one who wants to know the answers. There is bound to be someone else who also wants to know the answer. Also get as much time on skates as you can, when I was learning to play derby I would be on skates at every session I could, I’d go on street skates, and rink skating on a Wednesday night at Morley Rollerdrome. Any opportunity to strap wheels onto your feet is an opportunity to increase your skill.

Anything else you would like to share?
Roller Derby is fun, if you go out there and play it with passion and with joy and I have no doubt that you will find yourself skating with friends until the end of your days.